Our open letter to the future university president 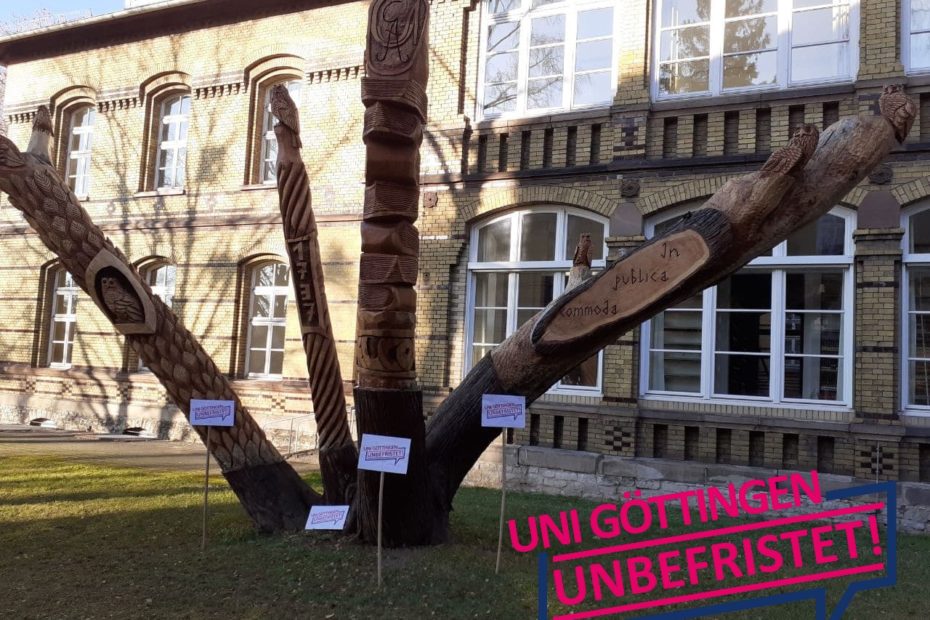 On June 6, 2019, the German federal and state governments reached a historical agreement concerning the future of higher education across Germany, known as the Zukunftsvertrag Studium und Lehre stärken (“The Contract for the Future of Studying and Teaching”). This agreement included a major commitment to funding of universities from 2021 onwards, extending and making permanent funds previously allocated on a temporary basis via the earlier “Higher Education Pact” (more here, sources available in German only). Among the purposes of the funding agreement, according to the Federal Ministry of Education and Research (Bundesministerium für Bildung und Forschung, or BMBF), is to ensure that the proportion of “permanent university staff involved in study affairs and teaching should be expanded.”

On 26.11.2020, we staged an action in front of the President’s Office to draw attention to the BMBF’s mandate for permanent contracts. As of 2019, an incredible 87.6% of academic employees at the University of Göttingen are struggling to build careers under the precarious conditions of temporary employment (sources here). The Göttinger Tageblatt (GT) and the Hessisch Niedersächsische Allgemeine have covered this issue. We can safely assume that the number of fixed-term positions in the administrative departments has also increased in line with the nationwide trend.

In the article of the Göttinger Tageblatt, the former President Jahn is quoted as affirming that “an important feature of the staff structure of an academic institution is the balance between temporary qualification positions and permanent functional positions.” We agree! But given that temporary employment among non-professorial academic staff in Göttingen is significantly higher than the already high national average of 80.4% (cf. DGB Hochschulreport, November 2020, p. 12), it is clear that the University of Göttingen is very far from achieving the balance. We want that the additional funding under the Zukunftsvertrag Studium und Lehre stärken is used to change this.

Furthermore, President Jahn was quoted in the GT as claiming that “the vast majority of temporary academic staff are employed for qualification purposes, most of whom are doctoral candidates.” This statement gives the impression that the work temporary academic staff are required to perform is mainly or entirely directed at enhancing their own qualifications. In reality, however, most of the work temporary academic staff perform in both “qualification positions” and so-called “project positions” are not related to their qualification (such as dissertation and habilitation) but are permanent university tasks such as teaching, coordinating study programmes, advising students, or digitalisation. Rather than supporting young scholars by allowing them to pursue their own research and writing, the university uses the ruse of “qualification” and temporary contracts to exploit them to secure the university’ s teaching and research. Indeed, the majority of BA level teaching and many other tasks essential to the smooth functioning of a university are performed by temporarily employed staff, whose own qualification work can often only be done outside working hours.

At the same time, it has long been evident that keeping many aspiring scholars trapped in temporary positions is neither healthy for society nor an efficient means of ensuring high-quality. Fixed-term contracts increase the pressure on employees who, inter alia, always have to worry about finding subsequent employment. The flexibility demanded of them restricts their own lives. Mental health as well as family life and planning suffer from uncertainty. Temporary contracts increase the dependence of staff on their supervisors, making additional unpaid work beyond even what their contracts demand, the norm. According to recent surveys by the German Federation of Trade Unions, 78% of fixed-term employees at universities work more than 10 hours of unpaid overtime per week. The system of fixed-term contracts keeps many university employees, who contribute vitally to research projects and departments, in administration, teaching and research, in a position of dependency and undermines their ability to plan their lives and support their families. Those who wish only to serve the university’s mission of education and the betterment of humanity through science should not be forced to gamble with their own lives and future prospects. Employment should not be a matter of speculation, especially for those who can least afford it.

Dear Prof. Tolan, you have become the president of this university at a time of crisis, not just for the university, but for those who ensure its smooth day-to-day functioning. We are aware that you have not caused this crisis, but by taking on the role of University President, it is now your duty to address it. Our livelihoods became a stake in the competition for funds under the Excellence Initiative, and when the University of Göttingen did not succeed, it was not those who chose this path who bore the consequences, but us. Even as we write these words, “human resources” decisions are being carried out in a wide variety of areas of the university; people are being dismissed and contracts are not being renewed. This is intolerable!

We call on you to develop a strategy together with representatives of the Staff Council in order to use the funds from the “Contract for the Future”, as demanded by the BMBF, for the expansion of permanent, secure positions in teaching and administration. Make this process, the decisions and the use of funds transparent! Permanent positions for permanent tasks! For the benefit of all!